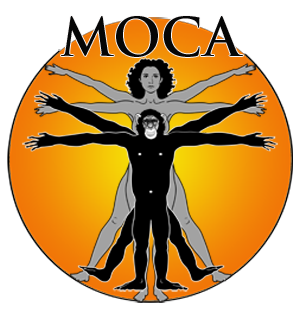 The Matrix of Comparative Anthropogeny (MOCA) is a collection of comparative information regarding humans and our closest evolutionary cousins (chimpanzees, bonobos, gorillas and orangutans i.e, "great apes"), with an emphasis on uniquely human features.

Comparisons of these non-human hominids with humans are difficult, as so little is known about their phenotypic features ("phenomes"), in contrast to humans. Ethical, fiscal, and practical issues also limit collection of further information about "great apes."

MOCA attempts to collect existing information about human-specific differences from "great apes," currently scattered in the literature. Having such information in one location could lead to new insights and multi-disciplinary interactions, and to ethically-sound studies to explain differences, and uniquely human specializations. It is for this reason that MOCA is called a "matrix" -- i.e. an arrangement of information from which something else originates, develops, or takes form.

MOCA is organized by Domains, each grouping Topics by areas of interest and scientific discipline. Each topic entry will eventually cover existing information about a particular difference (alleged or documented) between humans and non-human hominids.

MOCA is not targeted at experts in specific disciplines, but rather aims to communicate basic information to a broad audience of scientists from many backgrounds, and to the interested lay public. MOCA includes not only aspects wherein there are known or apparent differences between humans and “great apes,” but additionally, topics for which popular wisdom about claimed or assumed differences is not entirely correct.

By definition, MOCA is a perpetual work in progress. The site is being launched at an early stage, so that interested readers with expertise on specific topics can provide feedback. New information and topics will continue to be added as they are identified or discovered.

Read "How Different Are Humans and “Great Apes”? A Matrix of Comparative Anthropogeny" or browse the MOCA FAQ for additional questions and answers about MOCA.