2016/2017 Recipients of the Merle-Smith Fellowship Award

CARTA is pleased to announce the 2016/2017 recipients of the Merle-Smith Fellowship Award.

Sequoyah (Hector) Reynoso and Camille Toarmino are both entering their third and final year of the Anthropogeny Specialization Track. Their valuable contributions to the program, enthusiasm, and open-minded curiosity about anthropogeny make them particularly deserving of this prestigious award.

Established in 2015, thanks to a generous gift from long-time CARTA supporter, Annette Merle-Smith, this award is given to students who have performed at the highest level in the Graduate Specialization in Anthropogeny, a three-year program offered by the Faculty of Anthropogeny through CARTA to UCSD graduate students from a variety of participating UCSD PhD programs. Students enrolled in the program are required to complete the curriculum of elective courses on anthropogeny (explaining the origin of our species), participate in CARTA’s scientific symposia and ensuing discussions, network with researchers from around the world, and cross-train with peers from a variety of disciplines.

Graduate students complementing a traditional degree with a specialization in anthropogeny gain valuable training in transdisciplinary research spanning sciences and humanities. Such skill and qualification greatly benefits students as they embark on future careers in both public and private sectors, where the ability to mediate between different types of knowledge bases is becoming increasingly important.

Please join us in congratulating this year’s Merle-Smith Fellows! 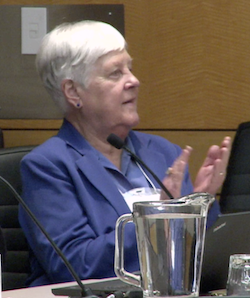 Annette Merle-Smith has been supporting CARTA from the beginning, lending her generosity first to CARTA’s symposia, then to its Museum of Primatology, and now to the Specialization Track in Anthropogeny. She remarked that she is particularly pleased to support the graduate students in the Anthropogeny program, knowing the value and impact this transdisciplinary education has not only on their research and future career, but also on their outlook on life.