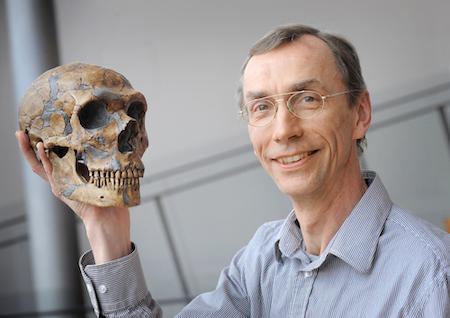 CARTA Member is awarded the 2022 Nobel Prize in Physiology or Medicine “for his discoveries concerning the genomes of extinct hominins and human evolution.”

A longtime contributor to CARTA's intellectual growth, Dr. Svante Pääbo is the director of the Max Planck Institute for Evolutionary Anthropology in Leipzig. He was honored today for his work in the field of palaeogenetics, of which he is considered the founder. Pääbo's biological father, biochemist Sune Bergström, was awarded the Nobel Prize in the same category in 1982 for his work on prostaglandins (lipids that have a hormone-like effect on animals, including humans).

Notably, Dr. Svante Pääbo is the first palaeoanthropologist to win this award (i.e., there is no such category for human evolutionary studies), which CARTA Executive Co-Director Pascal Gagneux hails as "essentially...the first Nobel for Anthropogeny." In support, Gagneux cites the Nobel Prize committee's award to Pääbo, which states, "By revealing genetic differences that distinguish all living humans from extinct hominins, his discoveries provide the basis for exploring what makes us uniquely human."

You can read more about this landmark award from the Max-Planck-Gesellschaft Newsroom: "Nobel Prize 2022 for Svante Pääbo" (Jacob, S. 03 Oct. 2022).

To those familiar with his work, Dr. Pääbo needs no introduction; for all others:

It is no overstatement to say that he has been foundational in our organization's ongoing intellectual development, collaborating significantly with CARTA Members from a variety of fields, and even co-authoring two high-profile papers with Emeritus CARTA Co-Director Ajit Varki:

Now, YOU'RE invited to join members of CARTA's new leadership board on Nov. 19, 2022, as CARTA presents, "Imagining the Future of Anthropogeny," to see how technology, the field, and our perspectives have evolved since then!

Live streaming begins at 12:00 p.m. PST with LIVE Q&A commencing ~3:20 p.m. As always, CARTA symposia are free and open to the public. For more details and to register: https://carta.anthropogeny.org/events/imagining-future-anthropogeny.