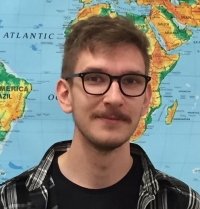 Language is a cognitive ability that both belongs uniquely to humans and is crucial for being a human. Because of that, if we want to understand the human phenomenon fully, we necessary need to figure out how language came to be, what underlying mechanisms make it possible and how it affects other aspects of cognition. As a graduate student in the Cognitive Science department at UCSD, my goal is to bring us a bit closer to the answers to these questions. My current project is investigating whether cross-linguistic differences in grammars of languages translate into differences between how speakers of these languages think about the world around them. For example, does the necessity to constantly mark a noun as feminine (or masculine) in your language make you think of its referent as being more similar to and having some properties of human females (or males)? If that is indeed the case, we would find an example of a small peculiarity of language having broad consequences on cognition and culture.

When I am not thinking about language or talking about what I think about it, I enjoy playing trivia games, learning about art, writing music and dancing.