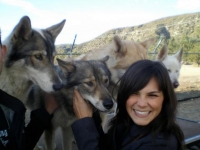 Caroline Horton is a graduate student in anthropology at UC San Diego. Caroline completed her BA with double majors in Integrative Biology and Anthropology at UC Berkeley.  While at Berkeley, she worked on a range of projects involving the skeletal remains of early hominins and ancient anatomically modern humans with Dr. Gary Richards at the Human Evolution Research Center. Her graduate education is in comparative neuroanatomy at UC San Diego, where she studies under Dr. Katerina Semendeferi in the Laboratory of Human Comparative Neuroanatomy in the Anthropology department. Her research interests lie in the evolution of the social brain and in elucidating the neural correlates for the socio-emotional behavior and cognitive processing involved in social relationships that define human uniqueness. Her current projects involve comparative histology with postmortem neural tissue of human subjects with Williams Syndrome, a rare neurodevelopmental disorder caused by a known genetic deletion and is accompanied by a unique social phenotype. Caroline is specifically interested in how certain regions of the brain, including the frontal cortex and related subcortical structures, which are critical to complex social behaviors such as empathy, are altered in Williams Syndrome. Such research aims, in conjunction with the known specificity of the Williams Syndrome genotype, will help to shed light on the relationship between the genetic and neuroanatomical changes that were critical to the evolution of social behaviors that allowed humans to navigate an increasingly complex social environment.