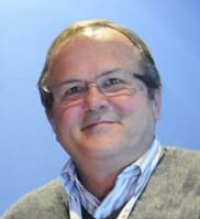 Andrew Baird trained in biochemistry (Ph.D., 1980) at McGill University in Montreal, Canada, and started as a postdoctoral fellow at the Salk Institute with Roger Guillemin (Nobel,1977) in the early 1980s, where he remained as a junior faculty to 1989. At the Salk Institute, he carried out basic research on the control of cell growth and function that was to lead towards the first isolation and characterization of the first-ever angiogenic factor called basic fibroblast growth factor (FGF2). Later, at the Salk Institute and subsequently with The Scripps Research Institutes in San Diego, California, he was involved in characterizing the FGF high affinity receptor, sequencing the FGF low affinity receptor (heparan sulfate), identifying the FGF2 promoter, generating the first transgenic mouse over expressing the FGF gene and establishing the first structure-function studies characterizing FGF2 ligand-receptor interactions. With this information, he identified a series of FGF2 agonists and antagonists for wound healing. In 1995, he moved into the biotechnology sector, where for 7 years (1995-2001), he learned the process of pre-IND drug development including QA/QC, cGMP, manufacture and process development. This experience turned his attention to the unique challenges of drug delivery, particularly for wound healing/injury therapeutics and specifically, the temporal-spatial needs for multiple factors at multiple times. In 2001, he returned to academia with a continued interest in drug discovery, biotherapeutics development and gene-based medicine deployment for injury and tissue repair. His laboratories were the first to demonstrate the feasibility of phage-based gene delivery and exploited directed evolution using phage display to create hybrid vectors for enhanced gene delivery. His current phage work is aimed at the identification of genes that encode proteins with intrinsic therapeutic value to tissue repair. He currently leads an NIH Exploratory Center for Innovative Wound Healing Research in the Department of Surgery at University of California San Diego where the research emphasis is focused on characterizing the human response to injury and defining the role of taxonomically-restricted and human-specific genes in inflammation, tissue repair and regeneration.