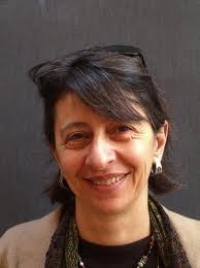 Anna Di Rienzo is a professor in the Department of Human Genetics at the University of Chicago. Dr. Di Rienzo’s research interests deal with the characterization of genetic variation in humans, the elucidation of the forces shaping and maintaining this variation, and the integration of knowledge from evolutionary and disease mapping studies to help dissect the genetic bases of common diseases and variable drug response. The recent availability of large-scale human variation data has allowed the detection of signals of natural selection on a genome scale and the delineation of the most important selective pressures that acted in humans. At the same time, high-throughput genotyping platforms applied to disease association studies hold great promise for the identification of new susceptibility variants for common diseases. A major theme of the work done in her lab is to link these areas of inquiry and to place the study of common disease phenotypes within a rigorous population genetics framework. To complement the above genome-wide efforts, she performs detailed studies of single genes or groups of genes within pathways; these studies are characterized by a tight connection between population genetics theory, empirical data collection and analytical methods that take into account the complexity of the data. By rooting our analyses deeply into the biology of the genes of interest, she aims to obtain novel insights and generate new models with general applicability.