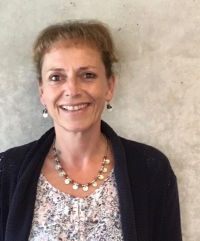 Caroline Nievergelt is a biological anthropologist interested in various aspects of human and non-human primate genetics and behavior. As a primatologist, she has studied behavioral, endocrinological, and genetic aspects of primate social and reproductive systems, including studies on New World Monkeys and lemurs in captivity and in the field in Madagascar.

More recently, Dr. Nievergelt has been working on biomarkers, genomic and epigenetic approaches to human disease identification. She is especially interested in the development and application of statistical methods integrating population genetic and evolutionary aspects into cross-sectional, prospective, and longitudinal studies. As a member of large collaborative efforts such as the Longevity Consortium, the International Kawasaki Disease Genetics Consortium, the Bipolar Consortium (BiGS), the Marine Resiliency study (MRS), and the Pharmacogenomics of Mood Stabilizer Response in Bipolar Disorder (PGBD), and the Million Veteran Program (MVP), she has published >200 articles related to the identification of biomarkers and mapping of loci for a broad range of human diseases and phenotypes, often in stratified and admixed populations. Most recently Dr. Nievergelt’s research has focused on PTSD and other stress-related disorders and she is a co-chair of the Psychiatric Genomics Consortium (PGC) for PTSD and leading the statistical analysis group.

Dr. Nievergelt is currently Professor of Psychiatry at the University of California San Diego and Associate Director of the Neuroscience Research Unit of the Center of Excellence for Stress and Mental Health (CESAMH), San Diego VA. She is the P.I. of three NIMH funded genomics studies entitled “Psychiatric Genomics Consortium for PTSD” and “The impact of traumatic stress on the methylome: implications for PTSD”, and "Psychiatric Genomics Consortium: Advancing Discovery and Impact".