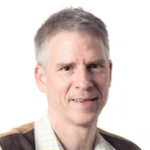 Christof Koch received his baccalaureate from the Lycée Descartes in Rabat, Morocco, his M.S. in physics from the University of Tübingen in Germany and his Ph.D. from the Max-Planck-Institut für Biologische Kybernetik, Tübingen. Subsequently, he spent four years as a postdoctoral fellow in the Artificial Intelligence Laboratory and the Brain and Cognitive Sciences Department at the Massachusetts Institute of Technology. From 1987 until 2013, he was a professor at the California Institute of Technology (Caltech) in Pasadena, from his initial appointment as Assistant Professor, Division of Biology and Division of Engineering and Applied Sciences in 1986, to his final position as Lois and Victor Troendle Professor of Cognitive & Behavioral Biology.  Dr. Koch joined the Allen Institute in Seattle, Washington as Chief Scientist in 2011 and became President in 2015.