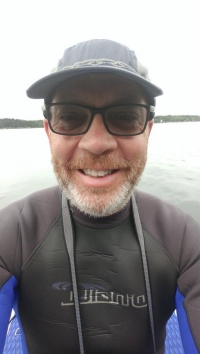 Curtis W. Marean, Foundation Professor in the School of Human Evolution and Social Change and the associate director of the Institute of Human Origins at Arizona State University, is interested in the relation between climate and environmental change and human evolution, both for its significance as a force driving past human evolution, and as a challenge to be faced in the near future.  This is a natural transdisciplinary topic that thrives at the intersection of archaeology, geology, geochemistry, geochronology, and climate and environmental sciences.  His current research focuses on the origins of modern humans, the significance to human evolution of coastal adaptations, the Great Human Diaspora, and the evolution of human cognition and cooperation.  His methodological specialties are zooarchaeology and field archaeology.

Curtis has focused his career developing field and laboratory teams and methods that tap the synergy between the disciplines to bring new insights to old scientific problems.  He has spent over 30 years doing fieldwork in Africa, and conducting laboratory work on the field-collected materials, with the goal of illuminating the final stages of human evolution – how modern humans became modern.  His fieldwork is focused in Africa and spans Somalia, Kenya, Tanzania and is now focused on coastal ecosystems in South Africa.

Curtis’ interest in ancient climates and environments led him to develop an international transdisciplinary project focused on the southern shores of South Africa at Pinnacle Point, near Mossel Bay.  This project, of which he is the principal investigator and project director, is called the South African Coast Paleoclimate, Paleoenvironment, Paleoecology, Paleoanthropology (SACP4) project.  It includes about 40 scientists from 10 countries, and has been funded by $2.5 and $1.0 million grants from the National Science Foundation and continuing generous funding from the Hyde Family Foundation.  The fieldwork at Pinnacle Point has documented the world’s oldest evidence for coastal foraging (Nature 2007), the first evidence for complex pyro-technology (Science 2009), and the first expression of microlithic technology (Nature 2011).   Most recently his team managed to extract and analyze from Pinnacle Point the microscopic shards from the Toba super-volcano eruption and show that people on the south coast thrived through this environmental catastrophe (Nature 2018).   More recently, Curtis and his colleagues have developed a new approach to the science of integrating climate and environmental change with human origins.  This approach, described in an article in Evolutionary Anthropology (2015), harnesses the computational powers of climate and agent based modeling to develop ancient Palaeoscapes of ancient humans. The results from this endeavor are just beginning to be published.

Curtis has always had an interest in employing new technologies to solve old problems in archaeology.  To that end, Curtis and his team have developed some of the most sophisticated archaeological field techniques in the world.  Recognizing that a fundamental problem in human origins science is the lack of field and lab methods standardization, Curtis and colleagues have developed a field project consortium called HOMER.  This consortium, funded by the Hyde Family Foundations, includes field projects in South Africa, Malawi, and Italy – all member projects agree to use and share the same field and lab methods and technology.  Other projects are joining this original group, and one of the main research questions it is tackling is the origins of human cooperation – it plans to solve the question of cooperation with cooperation.