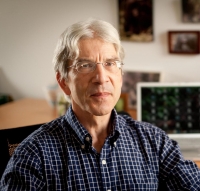 David Watts is a Biological Anthropologist and a Professor in the Anthropology Department at Yale University.  He received a B.A. from the University of Pennsylvania and M.A. and Ph.D. degrees from the University of Chicago.  His master’s research was n white-faced capuchin monkeys in Panama and his doctoral research was on the behavioral ecology of mountain gorillas.  He spent more than five years studying mountain gorilla behavior, ecology, and life history strategies at the Karisoke Research Centre in Rwanda, including serving as Karisoke Director in 1986-87.  Since 1993 he has pursued field research on chimpanzee behavior, ecology, and demography at Ngogo, in Kibale National Park, Uganda.  The Ngogo chimpanzee community is by far the largest yet known in the wild and has provided much valuable comparative data on hunting and meat eating, among other topics.   He is a Co-Director of the Ngogo Chimpanzee Project along with John Mitani (University of Michigan) and Kevin Langergraber (Arizona State University).  He has also taught at Roosevelt University, the University of Michigan, and Duke University.