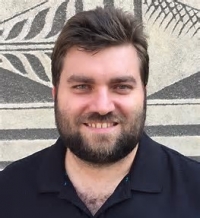 Federico Rossano is an Assistant Professor in the department of Cognitive Science at the University of California, San Diego. He obtained a laurea (BA+MA) in Communication Studies with a specialization in Semiotics from the University of Bologna (Italy). He received his PhD in Linguistics from the Max Planck institute for Psycholinguistics and Radboud University, Nijmegen (The Netherlands) and has worked as a post-doctoral researcher in the Department of Developmental and Comparative Psychology at the MPI for Evolutionary Anthropology in Leipzig (Germany). He has authored publications on psychotherapeutic interactions, joint attention and voice following in human infants and non-human primates, the development of property concerns, social norms, value perception and distributive and procedural justice in human ontogeny, gaze behavior in face-to-face interactions in different human cultures, gesture ontogeny and the development of communicative signals in baby non-human primates. His current research adopts a comparative perspective on social cognition and is focused on the development of communicative abilities and social norms in human and non-human primates.