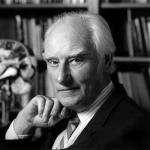 Francis Harry Compton Crick was born on June 8th, 1916, at Northampton, England, being the elder child of Harry Crick and Annie Elizabeth Wilkins. He has one brother, A. F. Crick, who is a doctor in New Zealand. Crick was educated at Northampton Grammar School and Mill Hill School, London. He studied physics at University College, London, obtained a B.Sc. in 1937, and started research for a Ph.D. under Prof E. N. da C. Andrade, but this was interrupted by the outbreak of war in 1939. During the war he worked as a scientist for the British Admiralty, mainly in connection with magnetic and acoustic mines. He left the Admiralty in 1947 to study biology.

During the academic year 1953-1954 Crick was on leave of absence at the Protein Structure Project of the Brooklyn Polytechnic in Brooklyn, New York. He has also lectured at Harvard, as a Visiting Professor, on two occasions, and has visited other laboratories in the States for short periods.

In 1947 Crick knew no biology and practically no organic chemistry or crystallography, so that much of the next few years was spent in learning the elements of these subjects. During this period, together with W. Cochran and V. Vand he worked out the general theory of X-ray diffraction by a helix, and at the same time as L. Pauling and R. B. Corey, suggested that the alpha-keratin pattern was due to alpha-helices coiled round each other.

A critical influence in Crick's career was his friendship, beginning in 1951, with J. D. Watson, then a young man of 23, leading in 1953 to the proposal of the double-helical structure for DNA and the replication scheme. Crick and Watson subsequently suggested a general theory for the structure of small viruses.

Crick in collaboration with A. Rich has proposed structures for polyglycine II and collagen and (with A. Rich, D. R. Davies, and J. D.Watson) a structure for polyadenylic acid.

In recent years Crick, in collaboration with S. Brenner, has concentrated more on biochemistry and genetics leading to ideas about protein synthesis (the «adaptor hypothesis»), and the genetic code, and in particular to work on acridine-type mutants.

Crick was made an F.R.S. in 1959. He was awarded the Prix Charles Leopold Meyer of the French Academy of Sciences in 1961, and the Award of Merit of the Gairdner Foundation in 1962. Together with J. D. Watson he was a Warren Triennial Prize Lecturer in 1959 and received a Research Corporation Award in 1962. With J. D. Watson and M. H. F. Wilkins he was presented with a Lasker Foundation Award in 1960. In 1962 he was elected a Foreign Honorary Member of the American Academy of Arts and Sciences, and a Fellow of University College, London. He was a Fellow of Churchill College, Cambridge, in 1960-1961, and is now a non-resident Fellow of the Salk Institute for Biological Studies, San Diego, California.

In 1940 Crick married Ruth Doreen Dodd. Their son, Michael F. C. Crick is a scientist. They were divorced in 1947. In 1949 Crick married Odile Speed. They have two daughters, Gabrielle A. Crick and Jacqueline M. T. Crick. The family lives in a house appropriately called «The Golden Helix», in which Crick likes to find his recreation in conversation with his friends.

This autobiography/biography was written at the time of the award and first published in the book series Les Prix Nobel. It was later edited and republished in Nobel Lectures. To cite this document, always state the source as shown above.