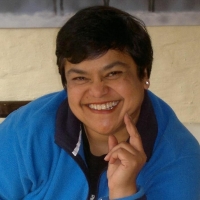 Himla Soodyall is a South African geneticist renowned for her groundbreaking genetic research into the peoples of sub-Saharan Africa in which her studies have identified some of the oldest DNA found in living people today, adding weight to the theory that modern humans evolved in the area now known as southern Africa. She obtained an MSc in biotechnology and a PhD in human population and evolutionary genetics from the University of the Witwatersrand (Johannesburg). Soodyall spent 4 years at Pennsylvania State University doing postdoctoral research with Mark Stoneking, one of the first researchers to advance the 'Out of Africa’ hypothesis on human origins. In 1966, she returned to South Africa to set up her own laboratory at the South African Institute for Medical Research, conducting population and evolutionary genetics research within the Department of Human Genetics. In 2001, Soodyall was appointed director of the Human Genomic Diversity and Disease Research Unit (HGDDRU), which the Medical Research Council had established in partnership with the university and the National Health Laboratory Service, as the SAIMR was now called. She was, until recently, a principal medical scientist at the NHLS as well as an associate professor at the University of Witwatersrand (Wits). As of November 1, 2018, Soodyall has been appointed as Executive Officer of The Academy of Science of South Africa (ASSAf).