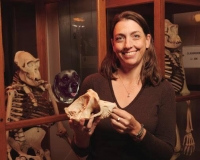 Jill Pruetz is a Professor of Anthropology at Texas State University specializing in Biological Anthropology. She received a Bachelor's in Anthropology and another in Sociology at Texas State University (then Southwest Texas State) in 1989. Her Ph.D. was awarded in 1999 in Anthropology at the University of Illinois at Urbana-Champaign. She studied vervet and patas monkey socioecology for her dissertation research, focusing on the influence that food availability had on female primate competition and dominance. Pruetz held a Postdoctoral position at Miami University (of Ohio) from 1999-2000, where she focused on assessing the presence and distribution of chimpanzees in savanna habitats in Senegal. Since 2001, Pruetz has been the Principal Investigator of the Fongoli Savanna Chimpanzee Project in Senegal, where she has focused on the environmental pressures that influences ape behavior there and how such behavior differs from chimpanzees living in forested environments. She uses these findings to inform our knowledge of early hominin behavioral ecology. Pruetz has studied primates in Kenya, Nicaragua, Panama, Costa Rica and Peru, as well as Senegal, and she leads field schools to Costa Rica to the El Zota Biological Field School, which she helped initiate in 1999. She is also the Director of the non-profit (501c3) organization, Neighbor Ape, which seeks to conserve chimpanzees in Senegal but also provides for the well-being of people that live alongside them.