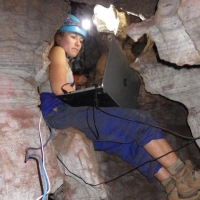 Lindsay Hunter has served CARTA in the role of Community Engagement & Advancement Director since November 2019. Lindsay is trained in Biological Anthropology (specializing in human evolutionary anatomy and Pleistocene hominin evolution) and is currently a Ph.D. candidate (Department of Archaeology, University of the Witwatersrand, Johannesburg, South Africa) with the following foci: how scientific collaboration networks impact epistemology; STEM history; UNESCO World Heritage Site management and local tourism; and the development of Public Palaeoanthropology as a community enterprise. Her goal is to interpret and apply the sometimes arcane subject of deep hominin history in practical ways that improve understanding and empathy in the present to ultimately shape a more equitable future for our species.

Lindsay received her Master’s degree in Biological Anthropology from the University of Iowa in 2004, and has studied fossil and human bone collections across five continents with major grant support from the National Science Foundation (United States) and the Wenner-Gren Foundation for Anthropological Research.

To learn more about how to Support CARTA or to simply chat more about the wonders of anthropogeny in general, you may reach Lindsay at khunter@ucsd.edu.