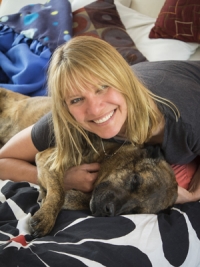 Leah Krubitzer is currently a professor in the Department of Psychology and Center for Neuroscience at the University of California, Davis.  She received a BS at Penn State University in Communication Disorders and a PhD in Psychology at Vanderbilt University, Nashville Tennessee. Her graduate work, under the mentorship of Dr. Jon Kaas focused on the evolution of visual cortex in primates.  Her interest in the evolution of the neocortex was extended in her postdoctoral work at the University of Queensland, Australia to include a variety of mammals such as monotremes and marsupials.  While in Australia she performed comparative analysis on the neocortex of a variety of different species and to date has worked on the brains of over 45 different mammals.  Her current research focuses on the impact of early experience on the cortical phenotype, and she specifically examines the effects of the sensory environment on the development of connections, functional organization and behavior and seeks to understand how cultural impacts brain development.  She also examines the evolution of sensory motor networks involved in manual dexterity, reaching and grasping in mammals.  She received a MacArthur award for her work on evolution.