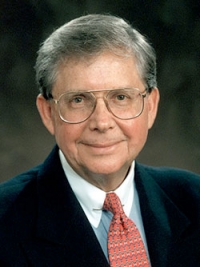 Lewis Lund Judd, who held the position of chair of the Department of
Psychiatry in the UC San Diego School of Medicine for 36 years before
stepping down in 2013 – an astounding 70 percent of the university’s
existence at the time – died December 16, 2018. He was 88.

Born in Los Angeles, Judd received his medical degree and training in
adult and child psychiatry at UCLA. He served on the faculty at UCLA
until 1970 when he was recruited by Arnold J. Mandell to the
then-one-year-old Department of Psychiatry and two-year-old UC San Diego
School of Medicine. The Department of Psychiatry at UC San Diego School
of Medicine was the first in the country to be neurobiologically
oriented. Judd would succeed Mandell as department chair in 1977.

Judd was an expert in biological psychiatry and clinical
psychopharmacology — and a forceful advocate for pushing psychiatry
beyond its decidedly charismatic, but often controversial, past to its
empirical present as a data-driven, hard-charging neuroscience. He was
an early and vocal leader of the idea that mental disorders, such as
depression, were the result of neurological and biological dysfunction,
and argued that they could be effectively treated with appropriate,
rigorously developed psychopharmaceuticals.

“Lew Judd was one of the giants of psychiatry and one of the leaders who
transformed psychiatry into a rigorous science using genetics and
imaging,” said David Brenner, MD, vice chancellor, UC San Diego Health
Sciences. “He built one of the greatest research departments in the
world and trained the next generation of its leaders. He had amazing
insight to anticipate areas of excitement and discovery and to invest in
these areas.”

As a young psychiatrist-in-training in the 1970s, Judd said the
profession’s emphasis still strongly emphasized the works of Sigmund
Freud, Carl Jung and others. It involved exploring a patient’s
state-of-mind through talk, dreams, free association and fantasies.
Successful psychoanalysis relied heavily upon the interpretive skills,
imagination and charisma of the practitioner. “It was an art form,” said
Judd in 2013, not a science. The underlying biology of the brain was
usually an after-thought.

Changing that mind-set would not be easy or quick. In 1988, for example,
in a Q&A in Parade magazine, Judd was asked whether depression was “an
act,” that with just a “little willpower,” according to the magazine’s
writer, a depressed person might “become cheerful again.”

“It’s a real disease, just as a heart attack is real,” Judd countered.
“Depression produces physical, emotional and thinking symptoms. Without
treatment, depression can last for years and can even end in suicide.
With treatment, as many as nine out of 10 people recover.”

“Lew built this department by choosing independent investigators who
could work together,” said Igor Grant, MD, FRCP(C), professor and
current psychiatry chair. “He sought breadth and depth. He wanted people
who could further the idea of psychiatry as evidence-based medicine. He
saw research as the key, and built a department that rose to become
among the top three National Institutes of Health-funded psychiatry
departments in the country.

“Another of his passions was the training of the next generation of
academic and clinical psychiatrists and psychologists. Indeed, the
majority of psychiatrists in practice in the San Diego region today were
trained in the programs he fostered.”

“This appreciation for the science of the human brain and mind exploded
under his NIH leadership in the late 80s when he launched “The Decade of
the Brain,” said Sandra A. Brown, PhD, vice chancellor for research and
Distinguished Professor in the UC San Diego School of Medicine. “It was
the transformative precursor to the BRAIN Initiative two decades later.”

“The thing I’m most proud of is how psychiatry is becoming increasingly
recognized as a real biomedical science,” Judd said in 2013. “It used to
be disdained. A broken mind wasn’t as real as a broken bone. We lionized
physical medicine, but dismissed brain biology, which has an enormous
affect upon not just our behavior, but our bodies as well.”

He was a member of the Institute of Medicine, now known as the National
Academy of Medicine. He received an honorary Doctor of Science from the
Medical College of Ohio for national leadership in brain research. The
American College of Physicians awarded him its William C. Menninger
Memorial Award for achievement in the science of mental health. And he
received the Distinguished Service Award from the American College of
Psychiatry and the C. Charles Burlingame Award from the Hartford
Institute of Living for meritorious contributions in education and
research in psychiatry.

Judd was also a dedicated and talented clinician. He trained in
psychoanalysis during his residency and provided psychotherapy and
psychopharmacologic treatment throughout his career until his
retirement.  He was often called upon to consult on challenging patient
conditions. He was always generous and available to help others.

He is survived by his wife, Patricia Judd, PhD, professor of psychiatry
at UC San Diego Health;  daughters Stephanie Judd, a clinical
psychologist; Catherine Judd, a professor of English literature; and
Allison Fee, an occupational therapist; sons-in- law Cliff Greenblatt
and Frank Fee; and grandchildren Helena, Henry, Spencer, Miles and Jack.
He was predeceased by his brother, Howard Judd, a UCLA faculty member in
the Department of Reproductive Medicine.

A tribute to Judd is planned in the late winter or early spring of 2019
in conjunction with celebration of the 50th anniversary of the founding
of the psychiatry department. The Lewis L. Judd Recognition Fund has
been established to help advance his ideas for better understanding and
treating mental disorders. https://go.ucsd.edu/2QIhc0a. Contributions can
also be made in his honor to the National Alliance for the Mentally Ill.