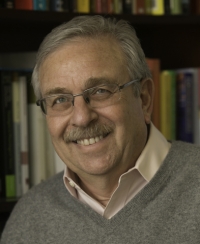 Mark Aronoff is a Trustees Distinguished Professor of Linguistics at Stony Brook University (State University of NY), where he has taught ever since receiving his Ph.D. from MIT. His major academic interests have been linguistic morphology, writing systems, undergraduate education, and sign language. His research has been funded by the National Endowment for the Humanities, the National Science Foundation, and the National Institutes of Health, as well as foreign and non-governmental agencies. He is a Fellow of the American Academy of Arts and Sciences, the American Association for the Advancement of Science, and the Linguistic Society of America. He has served as President of the LSA and editor of its journal, Language. For over a decade, he has worked with Irit Meir, Carol Padden, and Wendy Sandler on Al-Sayyid Bedouin Sign Language.