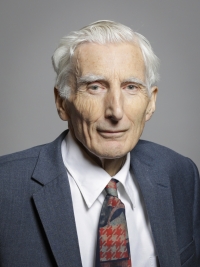 Martin Rees is a Fellow of Trinity College and Emeritus Professor of Cosmology and Astrophysics at the University of Cambridge. He holds the honorary title of Astronomer Royal and also Visiting Professor at Imperial College London and at Leicester University.

After studying at the University of Cambridge, he held post-doctoral positions in the UK and the USA, before becoming a professor at Sussex University. In 1973, he became a fellow of King's College and Plumian Professor of Astronomy and Experimental Philosophy at Cambridge (continuing in the latter post until 1991) and served for ten years as director of Cambridge's Institute of Astronomy. From 1992 to 2003 he was a Royal Society Research Professor, and then from 2004 to 2012, Master of Trinity College. In 2005 he was appointed to the House of Lords, and he was President of the Royal Society for the period 2005-10.

Martin is also one of the co-founders of The Cambridge Centre for the Study of Existential Risk (CSER).

Many scientists are concerned that developments in human technology may soon pose new, extinction-level risks to our species as a whole. Such dangers have been suggested from progress in Artificial Intelligence, from developments in biotechnology and artificial life, from nanotechnology, and from possible extreme effects of anthropogenic climate change. The seriousness of these risks is difficult to assess, but that in itself seems a cause for concern, given how much is at stake.

The Centre — a joint initiative between a philosopher, a scientist, and a software entrepreneur — was founded on the conviction that these issues require a great deal more scientific investigation than they presently receive. CSER is a multidisciplinary research centre dedicated to the study and mitigation of risks of this kind.