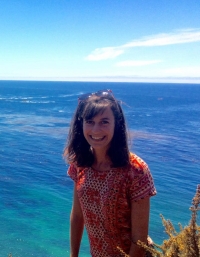 Megan Kirchgessner is a Ph.D. student in Neurosciences at UC San Diego and in the Callaway Lab at the Salk Institute.  Each of our 86 billion neurons makes thousands of connections with other neurons, allowing them to come together to create something immensely greater than the sum of its parts - the human brain. Megan is fascinated by how different neurons in the cortex - the outer sheath of the brain - connect up with each other in a remarkably organized way, forming "circuits" that underlie perception and complex behaviors. In particular, she studies neural circuits in the part of the cortex that is crucial for vision. By manipulating and measuring neuronal activity in the mouse visual cortex using techniques such as optogenetics and electrophysiology, she is able to investigate how specific types of neurons and their connections contribute to how the brain processes visual information. When not in lab, Megan can be found running all around San Diego, listening to NPR's new music channel, watching movies ranging from cerebral to inane, writing for NeuWrite SD, and indulging in San Diego craft beer.