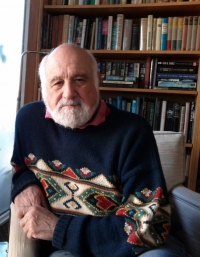 Michael Arbib is an Adjunct Professor in Psychology at UCSD and a member of the Contributing Faculty in Architecture at the New School of Architecture and Design in San Diego. As of mid-August 2016, he is Emeritus as University Professor, Fletcher Jones Professor of computer science, and professor of biological sciences, biomedical engineering, electrical engineering, neuroscience and psychology at the University of Southern California, which he joined in September of 1986. Born in England in 1940, Arbib grew up in Australia and received a B.Sc. (Hons) in pure mathematics from Sydney University. He received his Ph.D. in mathematics from MIT in 1963. After five years at Stanford, he became founding chairman of the Department of Computer and Information Science at the University of Massachusetts at Amherst in1970, and remained in that department until his move to USC in 1986. Michael Arbib's main contribution to CARTA addresses the question "how did the brain get language?" He has used computational modeling to assess two complementary themes. (i) Comparative neuroprimatology: Comparing the brains, behaviors and social interaction of extant monkeys, apes and humans to ground hypotheses on our last common ancestors with monkeys and apes and the changes that must have occurred to equip Homo sapiens  with a language-ready brain. (ii) To work back from computational models for neurolinguistics  to contribute to an EvoDevoSocio approach to the cultural evolution whereby humans went from protolanguages to diverse languages. A current concern is with implications of such a framework for the architecture of the built environment. His current research focuses on the ABLE Project (Action, Brain, Language, Evolution) linking data on brain mechanisms in macaque, chimpanzee and human within an evolutionary framework. He also explores the possible roles of neuroscience in the architecture of the built environment. Arbib is the author or editor of over 40 books, with most recently How the Brain Got Language: The Mirror System Hypothesis (Oxford University Press, 2012) and the edited volumes Language, Music and the Brain: A Mysterious Relationship (The MIT Press, 2013) and From Neuron to Cognition via Computational Neuroscience (with James Bonaiuto, The MIT Press, 2016).