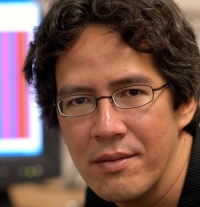 Dr. Michael Purugganan received his B.S. in Chemistry from the University of the Philippines (1985), an M.A. from Columbia University (1986) and a Ph.D. in Botany with a Global Policy minor at the University of Georgia (1993). After obtaining his Ph.D., he did postdoctoral research as an Alfred P. Sloan Molecular Evolution Fellow at the University of California in San Diego, studying the evolution of development (1993-1995). Dr. Purugganan is a leader in the field of evolutionary and ecological genomics and his work focuses on identifying the molecular basis for evolutionary adaptations that occur in nature. Prior to joining the NYU faculty in 2006, he was the William Neal Reynolds Distinguished Professor of Genetics at North Carolina State University, where he also won the Outstanding Faculty Research Award and the Sigma Xi Research Prize. He is the recipient of an Alfred P. Sloan Foundation Young Investigator Award, a Guggenheim Fellowship, is a Kavli Fellow, and in 2005 was elected a Fellow of the American Association for the Advancement of Science.  Dr. Purugganan has served on the editorial boards of the journals Molecular Biology and Evolution, Molecular Ecology, Trends in Plant Science and the Annual Review of Ecology, Evolution and Systematics.