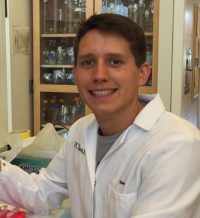 Michael is a graduate student in the lab of Ajit Varki. He completed his undergraduate work in biochemistry at the University of Georgia. At UGA he studied archaeal CRISPR-Cas defense systems in the lab of Mike Terns, and O-GlcNAc glycosylation in the lab of Lance Well. He then went on to study leptin signaling in Ruth Harris’s lab at the Medical College of Georgia before arriving at UC San Diego to pursue a Ph.D. in biomedical sciences with a specialization in anthropogeny. His current research aims to uncover the role of sialoglycoconjugates in the evolution of the human brain, combining his interests in glycosylation, neural development, and human evolution.