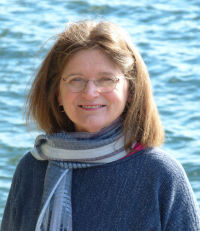 Nancy Knowlton is a coral reef biologist who spent much of her career at the Smithsonian, in Panama at the Smithsonian Tropical Research Institute and at the National Museum of Natural History in Washington, DC, prior to moving to Brooksville in Maine. She was also a professor at Yale and the Scripps Institution of Oceanography, University of California San Diego, where she founded and led the Center for Marine Biodiversity and Conservation. She is a global board member of The Nature Conservancy, was the Editor-in-Chief of the Smithsonian’s Ocean Portal, and helped lead the Census of Marine Life coral reef program. In 2013 was elected to the American Academy of Arts and Sciences and to the U.S. National Academy of Sciences. She is a winner of the Peter Benchley Prize, the Heinz Award, the Women’s Aquatic Network 2018 Woman of the Year award, the National Marine Sanctuary Foundation Lifetime Achievement Award, and the International Coral Reef Society’s Darwin Medal. She is the author of Citizens of the Sea and helped launch #OceanOptimism on Twitter, where you can follow her at @SeaCitizens.