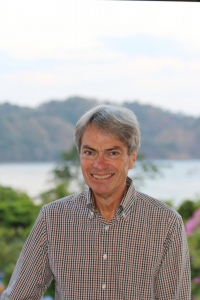 Peter Parham is Professor in the Departments of Structural Biology and Microbiology & Immunology at the Stanford University School of Medicine. As an undergraduate Dr Parham studied Natural Sciences at Cambridge University, subsequently obtaining his PhD in Biochemistry and Molecular Biology at Harvard University with Professor Jack Strominger. Elected a Junior Fellow of the Society of Fellows at Harvard, he spent a year working with Walter Bodmer in the Department of Genetics at Oxford University, before returning to Harvard to start his independent research program. Dr Parham joined the Stanford faculty in 1980. Throughout his career Dr Parham’s research has focused on proteins of the human immune system that vary greatly between individuals and populations. These differences, the consequence of natural selection, not only modulate the immune response to infection and cancer, but also influence the success of reproduction and therapeutic transplantion of cells, tissues and organs. Dr Parham has received scientific awards from the Leukemia Society of America, the American Society of Histocompatibility and Immunogenetics, the European Federation of Immunogenetics and the British Society of Immunology; in 2008 he was elected fellow of the Royal Society. Dr Parham has served on the Editorial Board of several major immunology Journals and as Editor-in Chief for Immunological Reviews. He is also the author of an introductory text-book ‘The Immune System’ that is used worldwide in immunology courses for undergraduate and professional students.