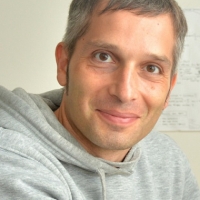 Philipp Khaitovich is a Professor at the Skolkovo Institute of Science and Technology (Skoltech) in Moscow, Russia. Born in Moscow, Russia, Khaitovich completed his undergraduate studies in molecular biology at Moscow State University in 1995 and received his PhD in biological sciences from the University of Illinois at Chicago in 1999. Post-doctoral studies followed from 2000 to 2006 at the Max Planck Institute for Evolutionary Anthropology in the Department of Evolutionary Genetics headed by Professor Svante Pääbo. In September 2006, Philipp took a faculty position at the Institute for Computational Biology jointly established by the Chinese Academy of Sciences and the Max Planck Society in Shanghai China. In 2012 Philipp was promoted to an institute director position. From 2012, Philipp is a fellow member of Max Planck Society of Germany, as well as adjunct Professor at ShanghaiTech University in Shanghai, China. Philipp joined Skoltech as a Full Professor in April 2014.