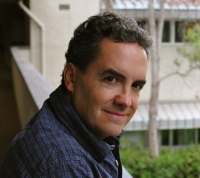 Rafael Núñez is a professor of cognitive science at UC San Diego. Dr. Núñez investigates cognition from the perspective of the embodied mind. He is particularly interested in high-level cognitive phenomena such as conceptual systems, abstraction, and inference mechanisms, as they manifest themselves naturally through largely unconscious bodily/mental activity (e.g., gesture production co-produced with a variety of conceptual mappings). His multidisciplinary interests bring him to address these issues from various interrelated perspectives: mathematical cognition, the empirical study of spontaneous gestures, cognitive linguistics, psychological experiments, neuroimaging, and ethnographic field research investigating spatial construals of time in the Aymara culture of the Andes, and more recently, in the remote Yupno culture of the mountains of Papua New Guinea. His 2001 book, Where Mathematics Comes From: How the Embodied Mind Brings Mathematics into Being (with UC Berkeley linguist George Lakoff) presents a new theoretical framework for understanding the human bio-cultural nature of mathematics and its foundations. He is the director of the Embodied Cognition Laboratory at UC San Diego with lab space and members dedicated to investigating how cognition is grounded on the peculiarities, experiences, and limitations of the human body. Originally from Chile, he is also a Swiss citizen after living many years in Europe.