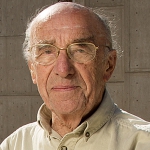 Roger Guillemin, a distinguished professor, won the Nobel Prize in 1977 for discoveries that laid the foundation for brain hormone research. His work brought to light an entire new class of substances shown to be important for the regulation of growth, development, reproduction and responses to stress.

The impact of Guillemin's studies has been profound for a variety of diseases and disorders, including thyroid diseases, problems of infertility, diabetes and several types of tumors.

Research laboratories and pharmaceutical industry have produced many synthetic analogs of these brain hormones. Analogs of somatostatin, are used to treat several types of tumors and are the primary medical treatment of the pituitary adenomas leading to acromegaly. Analogs of another hormone (GnRH) are used in problems of infertility and tumors of the prostate. Guillemin also was among the first to isolate endorphins, brain molecules known to act as natural opiates. Following the isolation of endorphins, his work with cellular growth factors (FGFs), in addition to inhibins and activins, led to the recognition of multiple physiological functions and developmental mechanisms.

Since his retirement from the active pursuit of science in 1989, Guillemin has shifted his long-standing expertise with computers from science to art. He is using the Macintosh computer to create images/paintings that are eventually transferred to paper or canvas.