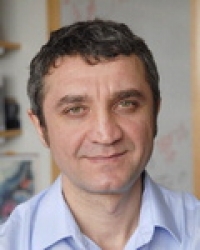 Ruslan Medzhitov obtained his undergraduate degree from Tashkent State University in 1990 and his doctoral degree from Moscow State University in 1993. Medzhitov became an assistant professor in 1999 at Yale University School of Medicine in the section of Immunobiology. He is currently the David W. Wallace Professor of Immunobiology at Yale University School of Medicine and an investigator of the Howard Hughes Medical Institute. His research interests include biology of inflammation, innate immunity, mechanisms of allergic reactions, cell signaling and gene regulation.  Medzhitov is a member of the National Academy of Sciences, National Academy of Medicine, and European Molecular Biology Organization, and he is a fellow of the American Academy of Microbiology.