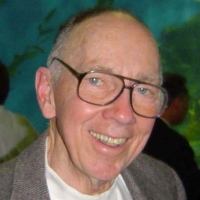 Russell Doolittle, considered an illustrious colleague and treasured faculty member, who made extraordinary contributions to the field of molecular evolution and the study of the clotting of blood, died Friday, October 11, 2019, from complications of metastatic melanoma. He was 88 years old.

Doolittle was born January 10, 1931, in New Haven, Conn. He attended Wesleyan University from 1948 to 1952, served in the U.S. Army, arriving in Korea a few days before the armistice in July of 1953, and married Frances Tynan, his wife of 64 years, in 1955. He earned a master's degree in education from Trinity College in Hartford, Conn., in 1957 while teaching science at New Milford High School. At the end of that year, he entered the doctorate program of the Department of Biological Chemistry in the Harvard Medical School, where he performed his doctoral research in the laboratory of J. Lawrence Oncley. After graduating in 1961, he spent a year teaching at Amherst College. Then, in 1962, he joined the laboratory of Birger Blombäck at the Karolinska Institutet in Sweden, where he spent two years on a postdoctoral fellowship from the National Institutes of Health. In 1964, he joined the laboratory of S. Jonathan Singer as an assistant research biologist in the Department of Biology at UC San Diego. In 1965, he accepted the position of assistant professor in what is now the Department of Chemistry and Biochemistry and, in 1987, he was also appointed in what is now the Division of Biological Sciences, ultimately becoming a member of the Section of Molecular Biology.

At UC San Diego, Doolittle studied the amino acid sequences of fibrinopeptides. His work in Sweden showed that the differences between mammal species in the amino acid sequences of these short peptides provided evidence of evolutionary relationships, so he set up a collaboration with the San Diego Zoo to obtain blood drawn from animals. This led to an article in a local periodical about "Dr. Doolittle" at the zoo.

Doolittle also realized in Sweden that the rate at which the sequence of amino acids in fibrinopeptides changed with time provided information about the period of time over which the separation of species within the different orders of animals occurred. He used this knowledge to create phylogenies for the cetartiodactyla order (pigs, camels, llamas, mule deer, reindeer, red deer, cape buffalo, bison, goats, and sheep), as well as for the primate order (macaque, green monkey, baboon, drill, gibbon, chimpanzee, and man). These were seminal studies in the nascent field of molecular evolution, which has exploded over the last 50 years.

Doolittle's study of molecular evolution resulted in one of the first online compendiums of all the amino acid sequences available at the time-a forerunner of the massive data banks now available online. He also began studies of the amino acid sequence of the complete molecule of fibrinogen from the lamprey, the member of the phylum of chordates most distant from mammals. With these results, he extended his quest for the ancestors of fibrinogen to invertebrates. In 1996, he published a phylogeny that included the divergence between plants, fungi, and animals dating from a billion years ago. He also advised others who were doing similar work around the world.

In the 1970s, while studying fibrinogen-the molecule in the blood that produces the clots that staunch bleeding but also can accumulate in the wrong places, causing strokes and heart attacks-Doolittle determined the sequences of the amino acids in the three polypeptides that comprise human fibrinogen, 1,810 amino acids in all. This was a monumental undertaking that tested the limits of existing techniques at the time.

Eager to do more, Doolittle deduced the structure of a molecule of fibrinogen and proposed a detailed molecular mechanism as to how the fibrinogen could polymerize to cause the blood to clot. Validation of his mechanism required an atomic structure of fibrinogen, which up to that time had defied the techniques of X-ray crystallography. Undaunted, Doolittle learned the necessary methods and persevered until he obtained several atomic structures, including that of the entire molecule of fibrinogen, thus proving his molecular explanation for blood clotting.

One of Doolittle's most important and broadly relevant contributions was his work on comparative protein sequence and structure. He also provided key insights into the evolutionary conservation of genes and the nature of gene families. He established the first building blocks of the human genome project, elevating the understanding of biology to a gene level in the 1970s and 1980s, setting the stage for future discoveries. He was a true pioneer in early gene science.

For the elegance and importance of his work, Doolittle was elected a member of the National Academy of Science in 1984. He received a Guggenheim Fellowship in 1984, the Paul Ehrlich Prize in 1989, and the John J. Carty Award for the Advancement of Science in 2006. Over the years, he presented 18 named lectures to various university faculties and scientific societies. He was a hands-on scientist and mentor, who also served UC San Diego at large as chair of the Department of Chemistry and Biochemistry, playing a role in establishing the basic science programs for the undergraduate curriculum in the department, as well as for the developing School of Medicine. He also served on 25 committees of the Academic Senate, as chairman of the Academic Senate, chair of the Executive and Policy Committee, and member of the university-wide Academic Council.

Doolittle, who was a marathon runner during his younger years and even made a run for Congress, was known to have high standards for scientific research, a willingness to do the work to meet those standards, and expectations of the same from his peers. He was an entertaining raconteur with many amusing stories, and he was a willing mentor to younger scientists. He always had a good word to say about his colleagues, and he was an enduring friend.

Doolittle was devoted to his wife, Fran, and their sons, Larry and Will, who survive him. He is also survived by his four grandchildren, who range in age from 16 to 30, and his siblings Donald Doolittle and Kathy Gunther, who both reside in Connecticut.