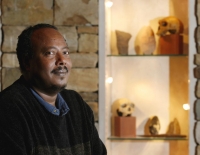 Sileshi Semaw, research associate at Indiana University’s CRAFT (Center for Research into the Anthropological Foundations of Technology) and Stone Age Institute, is also director of the Gona Paleoanthropological Research Project in Afar, Ethiopia. In a recent issue of Nature, he reported that the project team has recovered more than 30 fossils—primarily jaws and teeth—from at least nine early humanlike individuals assigned to Ardipithecus ramidus. Scientists believe that A. ramidus is the first hominid genus to arise after the lineage split that led to chimpanzees and humans. The recent Gona discoveries suggest that A. ramidus walked on two feet and dwelled in woodland and grassland areas with lakes, swamps, and springs nearby. Semaw has made other important discoveries at Gona, including the oldest known stone tools (about 2.5 million years old) used by ancestral humans. “Our latest research has shown that Gona is a unique site preserving a wealth of information on the biological origin as well as the cultural beginnings and evolution of humankind,” says Semaw.