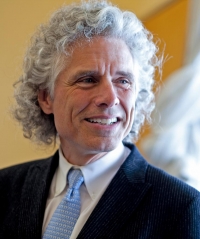 Steven Pinker, a native of Montreal, received his BA from McGill University in 1976 and his PhD in psychology from Harvard in 1979. After teaching at MIT for 21 years, he returned to Harvard in 2003, where he is Harvard College Professor and the Johnstone Professor of Psychology. Pinker's experimental research on cognition and language won the Troland Award from the National Academy of Sciences, the Henry Dale Prize from the Royal Institute of Great Britan, and two prizes from the American Psychological Association. He has also received several honorary doctorates and numerous awards for graduate and undergraduate teaching, general achievement, and his books The Language Instinct, How the Mind Works, and The Blank Slate. Pinker has also appeared in many television documentaries and writes frequently in the popular press, including in The New York Times, Time, and The New Republic.