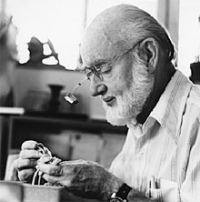 Professor Emeritus Theodore Bullock, a renowned neurobiologist who was affiliated with the University of California, San Diego (UCSD), for nearly four decades, died on December 19 in La Jolla, Calif. He was 90. He remained active until the day of his death, when he experienced breathing problems and had died by the time he was taken to Thornton Hospital.

Bullock joined the university in 1966 and was a member of the Department of Neurosciences at the UCSD School of Medicine and maintained strong ties to UCSD's Scripps Institution of Oceanography.

Bullock's pioneering investigations included studies of sensory systems, especially in fish, neurophysiology of nerve cells, and electrical activity and evolution of the brain.

"He was an outstanding neurophysiologist, much beloved by his students, with an extraordinarily productive career," said Leon Thal, M.D., chair of the Department of Neurosciences at the UCSD School of Medicine, and a long-time colleague of Bullock's.

"Scripps has lost one of its closest UCSD collaborators and friends," said Scripps Director Charles Kennel.

"As a person and as a scientist, Ted Bullock was of the first importance. With the passage of time, I think there is a good chance that Ted will come to be recognized as second only to the immortal Ramon y Cajal in his accomplishments and his influence on his fellow neuroscientists," said Nicholas Holland, professor of marine biology and a colleague of Bullock's at Scripps for the past four decades.

A member of the National Academy of Sciences since 1963, Bullock received a variety of awards and honors during his long career, including, among others, a Fulbright Scholarship from the Zoological Station in Naples, Italy, in the 1950s, the Karl Spencer Lashley Award from the American Philosophical Society in the 1960s, a Queen's Fellow in Marine Biology in Australia in the 70s and an honorary doctorate from the University of Frankfurt in the 80s.

Bullock's investigations resulted in a lengthy record of research publications. He obtained his Ph.D. from the University of California at Berkeley in 1940. After serving for 20 years as a professor of zoology and member of the Brain Research Institute at UCLA, Bullock joined UCSD in July, 1966. According to his autobiography, Bullock was born in Nanking, China in 1915, the second of four children of Presbyterian missionary parents who came to China in 1909.