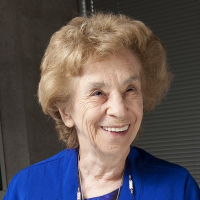 Ursula Bellugi (d. April 17, 2022) was a professor and director of the Laboratory for Cognitive Neuroscience at the Salk Institute. She was also associated with the Neurosciences Group, the Cognitive Sciences Program, the Institute for Neural Computation, and the Psychology Department at UC San Diego. She was a visiting professor at Rockefeller University, the University of Hong Kong, and the Consiglio Nationale delle Ricerche in Rome. Bellugi was the recipient of several awards, including the IPSEN Prize, the Distinguished Scientific Contribution Award from the American Psychological Association, and a MERIT award from the NIH. Her research focused on the biological foundations of language and cognitive functions and their genetic basis, including studies of language, modality, and the brain; brain organization: clues from sign aphasia; spatial language and spatial cognition; and fractionations between language and cognition; and Williams Syndrome: bridging cognition and gene. These studies permitted the exploration of some of the central issues of cognitive neuroscience linking cognitive functions with their bases in neurobiology and gene expression. Bellugi co-authored several books including The Signs of Language (Harvard University Press, 1988), and What the Hands Reveal About the Brain (Branford Books, 1990).