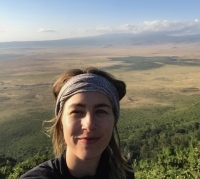 Vanessa Bateman is a doctoral candidate in Art History, Theory, and Criticism at UC San Diego. Currently, her dissertation research focuses on visual representations of hunting in the early twentieth century; connecting hunting practices to technological developments in visual media that were concurrent with the conservationist movement in the United States (1890-1920).

Although Vanessa focuses on the modern, she situates the subjects of hunting and animals through their place in the development of visual language and larger conceptions of the human/animal divide. Broader questions in her research considered the artistic representations of human evolution and the many past species for which we now have fossils and how these representations are by definition between the animal and the human. How can anthropogeny help us to determine what makes us human? How did visual language/making play a role in human as self-realized? Or do early visual representations reflect a confusion of what it means to be animal, and the loss of animality through cultural and biological evolution?