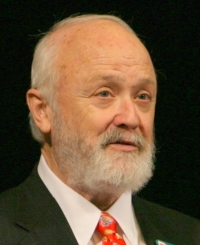 William H. Calvin is an Affiliate Professor Emeritus of Psychiatry and Behavioral Sciences at the University of Washington in Seattle.  His research interests include the recurrent excitatory circuitry of cerebral cortex used for split-second versions of the Darwinian bootstrapping of quality, and the brain reorganization for language and planning during "The Mind's Big Bang" which occurred about 50,000 years ago, long after our brains had reached their current size.  Lately he has made some progress on the puzzle represented by two rarities in evolution (eusociality in humans and the 3x brain enlargement since 2.3 million years ago) by analyzing an amplifying feedback loop driven by a boom-and-bust cycle in the meat supply for our ancestors.  He is the author of fourteen books including The Cerebral Code (MIT Press, 1996), How Brains Think (Basic Books, 1996), Lingua ex Machina (MIT Press, 2000), A Brain for All Seasons (University of Chicago Press, 2002), A Brief History of the Mind (Oxford University Press, 2004), and Global Fever (University of Chicago Press, 2008).