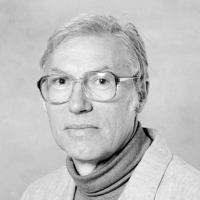 Wolfgang “Wolf” Berger, an oceanographer, author, longtime professor and former interim director of Scripps Institution of Oceanography at the University of California San Diego, died August 6 at the age of 79.

Berger was one of the pioneers in paleoceanography and seamlessly integrated all branches of oceanographic science: physical, chemical, biological and geological. His research included investigations of plankton ecology, the carbon cycle, the history of climate, and the productivity of the oceans. Considered an ambassador for science, Berger was a renowned expert on how the ocean, atmosphere, and climate develop and change over time. (View photo gallery; listen to oral history interview conducted in 2012.)

“Wolf Berger was one of the architects of the field of paleoceanography for which he received the Bigelow Medal, the Ewing Medal and the Balzan Prize among many other awards,” said Margaret Leinen, director of Scripps Institution of Oceanography and Vice Chancellor for Marine Sciences at UC San Diego. “We were fortunate to have him spend most of his career with us as a student, faculty member, division director and interim director. His text books and popular oceanography books also excited students and the public around the world."

In 1971, Berger rejoined Scripps, where he remained for the rest of his career, eventually serving as chair of the Geosciences Research Division from 1994 to 1996. He also served as interim director of Scripps Institution of Oceanography in 1996, a position he held until Charles Kennel was appointed director in December 1997.

"Wolf was a polymath who substantially started the field of paleoceanography,” said Richard Norris, professor of paleobiology at Scripps, “particularly the study of productivity in the oceans, the carbonate compensation depth, and the broader links of paleoclimatic evolution to the biological evolution in the oceans."

Berger is the author of nearly 250 scientific publications and is known for his work on the selective preservation of calcareous fossils on the deep-sea floor, which had wide-ranging implications and ramifications for the understanding of the carbon cycle in the sea, and its link into climate variations. He also led the study of the history of productivity in the oceans and its role in the evolution of marine life, including that of the great whales. In recent years, he explored the mechanisms of sea-level change and modulation of climate by variations in Earth’s orbital dynamics.

"Wolf was a most generous and kind person who excelled in everything he did,” said Miriam Kastner, professor of geochemistry at Scripps Oceanography. “In addition to his deep involvement with science, Wolf also had other interests – he was a first class chess player, and wrote children books and guide books on the geology and ecosystems of La Jolla and the North County."

In addition to his studies, Berger is the author of the widely used textbook The Sea Floor (4th edition revised, 2017) and the popular book, Walk Along the Ocean, a guide to the shoreline of San Diego’s North County, as well as two other books with local themes--Coast to Crest and Beyond set in the San Dieguito River Park, and San Elijo Lagoon: a Wetland in Southern California. He also wrote Feed Me: the Story of Penny the Penguin Chick for children. He also served on the editorial boards of Geology, the AGU Monograph Series, Marine Geology, Marine Micropaleontology, the Journal of Foraminiferal Research, AGU Paleoceanography, and the Journal of Paleoclimatology and on the advisory board of the Aquarium of the Pacific.

Berger’s accolades were numerous and global. His honors included receiving the Milutin Milankovich Medal from the European Geosciences Union (2012), the Francis P. Shepard Medal from the Society for Sedimentary Geology (2001), the Steinmann Medal of the German Geological Association (1998), the international Balzan Prize for his pioneering work in paleoceanography using micropaleontological methods for deciphering the geological history of the oceans and climatic implications (1993), the Maurice Ewing Medal from the American Geophysical Union and the U.S. Navy for contributions in marine geophysics (1988), the Humboldt Award from the Alexander-von-Humboldt Foundation for contributions to the earth sciences (1986), the Huntsman Medal of the Bedford Institute of Oceanography for contributions to the marine sciences (1984), and the Henry Bryant Bigelow Gold Medal from Woods Hole Oceanographic Institution for distinguished service to oceanography (1979).

In January 1998, Berger was appointed director of the California Space Institute, a statewide education and research center at UC San Diego, where he oversaw basic and applied research in interdisciplinary, space-related fields at UC San Diego and other UC campuses. He officially retired in 2006.

Berger is survived by his wife Karen, and children Karl and Katrina and five grandchildren, Brianna, Lukas, Kaleb, Rohan, and Clara.