Certainty styling is being phased out topic by topic.

Cholera is caused by the bacterium Vibrio cholerae, which secretes a toxin whose B subunit binds the cell surface ganglioside GM1, delivering a toxic A subunit to the interior of the intestinal cell, causing watery diarrhea. The famous bacteriologist Robert Koch found that he could not infect any other animals with the organism, and concluded that "...although these experiments were constantly repeated with material from fresh cholera cases, our mice remained healthy. We then made experiments on monkeys, cats, poultry, dogs and various other animals that we were able to get a hold of, but we never were able to arrive at anything in animals similar to the cholera". The reasons for this are unknown.  There are statements in the literature that chimpanzees are also resistant to cholera.

Cholera is a diarrheal disease caused by the Gram-negative bacteria Vibrio cholerae. The facultative pathogen causes serious illness and death in humans by secreting an AB5-subunit toxin. The B subunit binds gangliosides (sialated glycosphingolipids) on intestinal epithelium, causing endocytosis of the A subunit. Subsequent activation of adenylyl cyclase leads to excessive water and electrolyte secretion, dehydration, and death. (Nelson 2009, Baron 1996). The effects of the toxin persist until the intestinal cells turn over, meaning that secretory diarrhea usually persists even after the bacteria is killed with an appropriate antibiotic. Support therapy depends on oral rehydration therapy using a mixed glucose/saline solution. Disease control rests largely on good sanitation, and cholera contributed significantly to the development of epidemiology and the sanitation imperative. Descriptions of illness that are consistent with cholera go back 3,000 years to ancient Indian writers. The disease spread into China and southern Russia in 1817. Since then, there have been multiple pandemic level outbreaks, including the 1991 El Tor strain in Peru (Guerrant 2003, Freter 1995).  The lifecycle of the pathogen includes human and aquatic stages at is passes from infected human, contaminates nearby water, gets consumed, and then infects the intestinal wall of its next host. 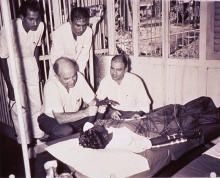 Cholera epidemic map of Nashville, Tennessee, 1873 by Ely McClellan. Similar to groundbreaking work by John Snow in London in 1854. Image courtesy of the National Library of Medicine 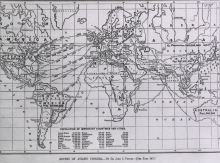 Surprisingly, humans are the only natural host for the bacterium (Gyr 1979). Efforts to establish illness in animal models frustrated early researchers. Koch successfully infected guinea pigs by treating them with sodium bicarbonate to neutralize stomach acid and opium to paralyze the intestinal motility. Metchnikoff hypothesized that a newborn gut, unprotected by established flora, might be susceptible to vibrio, and successfully infected neonatal rabbits in 1894 (Ritchie 2009). Work by Taylor (1987) and Butterton (1996) also demonstrate that mice can be colonized with vibrio cholerae. Very few of the animal models recapitulate the secretory “rice-water” diarrhea classically observed in humans. In addition infection usually requires irritation or trauma to the intestinal lining, and health animals resist cholera infection. Great apes do not appear to suffer from cholera infection. Primate infection with Vibrio has been carried in lab using “monkey-adapted” Vibrio and protein deficient vervet monkeys (Gyr 1979). Natural Infection in wild primates has not been observed.

Mechanisms Responsible for the Difference:

Work by Moustafa (2004) demonstrates that Vibrio cholerae neuraminidase, which cleaves sialic acids to promote toxin entry into the enterocyte, contains lectin domains that bind Neu5Ac, a sialic acid that is particularly enriched in humans. Great apes, like most mammals other than humans, also produce Neu5Gc, reducing the availability of Neu5Ac and possibly explaining pathogen specificity. The most recent debate about the disease surrounds horizontal gene transfer between pathogenic vibrio by an encoded bacteriophage carrying the CTX gene element. In combination with selection by wild bacteriophages, this horizontal transfer is thought to contribute to a rapidly evolving Vibrio cholerae genome.

Human sialic acid differences may provide selective advantage or disadvantage depending on the context of the challenge. Particularly interesting is the arms race between human and pathogen molecular recognition. The elimination of the enzyme that synthesizes Neu5Gc may have decreased human susceptibility to a number of pathogens while providing new cell-surface patterns that human specific pathogens exploit.