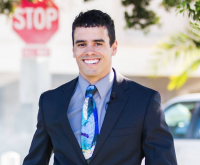 Sequoyah Reynoso is a Ph.D student in neuroscience at UC San Diego.  Sequoyah’s research interest include sexual attraction and selection and he is currently studying cell-surface molecules on sperm cells in the lab of Pascal Gagneux. Whereas many think that winning a mate signals the end in the game of sexual selection, there are actually many more biological obstacles for a pair of organisms to hurdle in order for successful procreation. For instance, compatibility between male and female gametes is vital for successful fertilization and survival of the embryo. He wonders whether such hidden biological (in)compatibilities somehow manifest themselves via surface attraction between two individuals, and what neural mechanisms exist to mediate the selection of a suitable mate.