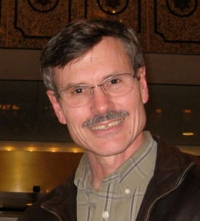 Christopher Ruff is a professor and director of the Center for Functional Anatomy and Evolution at the Johns Hopkins University School of Medicine. His work combines biomechanical modeling of the skeletal system with comparative and evolutionary studies of primates, focussing in particular on hominins. He is especially interested in the evolution of hominin bipedality and subsequent changes in postcranial robustness that reflect cultural-biological interactions, including the relationships between relative brain size, technological sophistication, activity patterns, and physical capabilities. Other major interests include the effects of climate on human body size and shape in both living populations and fossil hominins, and the influence of mechanical factors on skeletal growth and development. His work has also been applied in modern clinical settings, including prediction of fractures from indices of skeletal strength and loss of bone mass with aging (osteoporosis).  He is a Fellow of the AAAS (Anthropology Section), and has served as the past Editor of the Yearbook of Physical Anthropology, on the editorial boards of the American Journal of Physical Anthropology, Journal of Human Evolution, and Journal of the Anthropological Society of Nippon, and on advisory committees for the AAAS, NSF, AAPA, and L.S.B. Leakey Foundation.