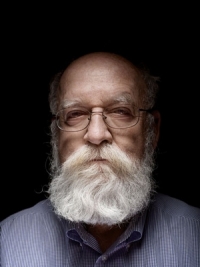 Daniel Dennett is the Fletcher Professor of Philosophy and Co-director of the Center for Cognitive Studies at Tufts University. He is the author of many books, including Consciousness Explained (Back Bay Books, 1992), Darwin’s Dangerous Idea (Simon and Schuster, 1995), and Breaking the Spell (Penguin, 2006). He is co-author, with Matthew Hurley and Reginald Adams, of Inside Jokes: Using Humor to Reverse-Engineer the Mind (The MIT Press, 2011). Recent co-authored articles include McKay and Dennett, “The Evolution of Misbelief,” in Behavioral and Brain Sciences, 2009, and Cohen and Dennett, “Consciousness Cannot Be Separated From Function,” in Trends in Cognitive Science, 2011. He is the 2012 recipient of the Erasmus Prize, presented at the Royal Palace in Amsterdam by Crown Prince William, honoring his work in explaining science to the general public.