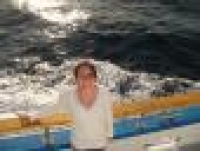 I am a neuroscientist interested in the developing visual system. I am currently studying the response and recovery after neural injury in the optic tectum (a region analogous to the mammalian superior colliculus) of Xenopus laevis tadpoles. By studying the effects of altered gene expression of a highly conserved gene such as Candidate Plasticity Gene 15 (CPG15), I can begin to understand the differences between neural injury response in the adult system versus the developing system. Since CPG15 is a highly conserved gene, these results can be more broadly applied to other species, including primates. I am particularly interested in the developing nervous system because there are many similiarities that exist only during development between species, and the developing system is much more plastic than the adult system.