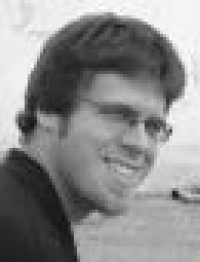 My interest is in multi-agent coordination and communication. My data mining efforts focus on creating a massive dataset concerning the link between bottlenose dolphin vocalizations, behavior, and social configuration. My modeling efforts focus on the problem of how decentralized agents should coordinate through the use of their bodies and sounds to achieve certain joint goals.

Bottlenose Dolphin Signature Whistles: Variation and Context
Understanding dolphin communication involves studying the relationships between dolphin vocal and behavioral repertoires and the social contexts in which vocalizations and other behaviors are produced. This project focuses on extracting signature whistles from an audio corpus and clustering those whistles into categories. Within a cluster of structurally similar whistles (multiple tokens of a single whistle type), I expect to find quantitative differences that vary depending on which animal produced the whistle as well as the social context in which the whistles were produced. By analyzing video recordings that were recorded at the same time as the acoustic data, I seek to quantify how signature whistles vary with social configuration.

Modeling the evolution of symbolic representation
To understand the evolution of language, it has been important to understand how collective group behavior can allow a set of shared symbols to converge on shared meaning. To fully understand the origins of language, however, it is important to have a theory of the origin of those symbols; it becomes important to investigate the emergence of the capacity for symbolic representation. This is particularly important if we want to explore the possibility that language did not come from a discrete jump in evolution in which primates suddenly gained the capacity for symbolic thought. This line of research is focused on understanding how the capacity of symbolic thought may arise from the sensorimotor coordination of a community of embodied agents. One part of my research aims to formalize this scenario in the Dec-MDP and Dec-POMDP decision-theoretic frameworks (Bernstein et al., 2002), which focus on cooperative decentralized planning. Specifically, I seek to generalize the situation of agents learning a joint attention task (Hutchins & Hazelhurst, 1998). The second part focuses on understanding the inter-agent and intra-agent coordination of multiple sensory and perceptual modalities. Distributed Cognition (Hutchins, 1995) has been particularly successful at studying the cognitive abilities of a system of interacting agents, by tracking the states and interactions among various sensory and motoric subsystems. Similarly, previous research (Sporns, Karnowski, & Lungarella, 2006) utilizing information theory has demonstrated the cognitive consequences of individual agents with coordinated sensor and motor systems. We propose to adapt this suite of informational measures to study sensorimotor coordination at the multi-agent level.