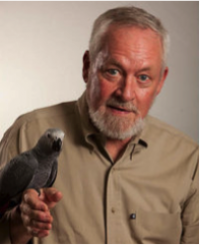 Stephen R. Anderson is the Dorothy R. Diebold Professor of Linguistics at Yale University, and also professor of Psychology and Cognitive science. His research examines how the structure of language can contribute to a broader study of the structure of the mind. He has studied Scandinavian, Romance, Celtic, Caucasian and American Indian languages, and also does research on a form of Rumantsch, one of the four national languages of Switzerland. He has devoted most of his attention to a theory of morphology (the structure of words) that emphasizes knowledge of relations among words, rather than the units that make up those words. He is also interested in the nature of communication in animals and its relation to the cognitive abilities underlying human language -- the topic of his book, Doctor Dolittle's Delusion: Animals and the Uniqueness of Human Language, which was chosen as the Best Book in Psychology in 2004. Other books are The Organization of Phonology, Phonology in the 20th Century: Theories of Rules and Theories of Representations, A-Morphous Morphology, The Language Organ: Linguistics as Cognitive Physiology (with David Lightfoot), Aspects of the Theory of Clitics. His most recent book, Languages: A Very Short Introduction, deals with the problem of how languages are to be individuated and counted, and shows how close this issue is to that of speciation in biology. He chaired Yale's Department of Linguistics almost continuously from 1995 until December, 2010. He is also a member of the board of directors of Haskins Laboratories, an independent research institute in New Haven that focuses on the biological bases of speech and language. He served as the 83rd president of the Linguistic Society of America in 2007, and is a fellow of the American Academy of Arts and Sciences, the American Association for the Advancement of Science, the Association for Psychological Science and the Linguistic Society of America. He held a Guggenheim Fellowship in 1988-1989. He is also a founding member of Project Steve, an initiative by a group of scientists -- all with the first name of Steve -- to defend the teaching of evolution in public schools.