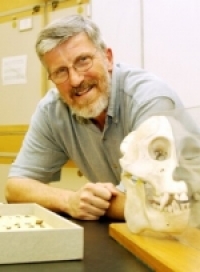 Bernard Wood is The University Professor of Human Origins and Professor of Human Evolutionary Anatomy at George Washington University. Dr. Wood is a medically qualified paleoanthropologist who practiced as a surgeon before moving into full-time academic life in 1972. In 1982, he was appointed to the S.A. Courtauld Chair of Anatomy in The University of London, and in 1985 he moved to The University of Liverpool to the Derby Chair of Anatomy and to the Chairmanship of the Department of Human Anatomy and Cell Biology. He was appointed the Dean of The University of Liverpool Medical School in 1995 and served as Dean until his move to Washington in the fall of 1997. When he was still a medical student, he joined Richard Leakey's first expedition to what was then Lake Rudolf in 1968 and he has remained associated with that research group, and pursued research in paleoanthropology, ever since. His research centers on increasing our understanding of human evolutionary history by developing and improving the ways we analyze the hominin fossil record, and on using the principles of bioinformatics to improve the ways we store and collate data about the hominin fossil record. He has a special interest in the recognition of species and genera in the hominin fossil record, and he collaborates with researchers interested in the evolution of non-hominins in the interests of ensuring that we analyze hominin evolution in a proper comparative context. He has written one of the monographs in the series on the Koobi Fora site, and publishes papers on paleoanthropological topics. He is also the editor of the Wiley-Blackwell Encyclopedia of Human Evolution.