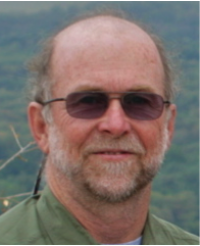 Jim Moore is an emeritus associate professor of the Department of Anthropology at UC San Diego. His research is on the behavioral ecology of modern primates, with specific interest in the use of insights gained from such work to aid our understanding of Plio-Pleistocene hominins.  For most of his career, this work has been carried out on savanna-living chimpanzees at Ugalla in western Tanzania, as a member of the Ugalla Primate Project (now https://www.gmerc.org/). He also has written extensively about the relationship between demography and behavior (specifically, nepotism and dispersal) in primates.

Ugalla is one of the driest and most open sites at which chimpanzees live, and is one of only three active savanna chimpanzee study sites. It has a full complement of predators (lion, leopard, hyena and wild dog) as well as elephant, zebra, roan and at least seven other species of primate. The main study community has over 60 individuals; unfortunately (but interestingly) the prevalence of SIVcpz (the chimpanzee version of HIV) is about 30%. Population density is less than 1/20th of forested sites like Gombe or Kibale.

Understanding how chimpanzee behavior and social structure is influenced by adaptation to savanna life (either directly by the distribution of resources and predators, or indirectly via the effects of population density) can help us understand the scope of chimpanzee biocultural adaptation, as well as help generate, refine, and hopefully test models of early hominin evolution in very similar savanna-woodland environments.