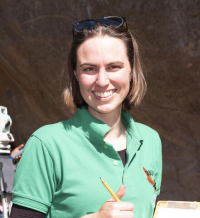 Jessica Thompson specializes in human evolution, and especially those aspects that can be revealed through the analysis of ancient animal bones found at archaeological sites (zooarchaeology). She leads the Malawi Ancient Lifeways and Peoples Project in Malawi, central Africa, where she has maintained a field site since 2009. This multidisciplinary work combines archaeological science, evolutionary theory, and hunter-gatherer ethnography to develop and interpret the first cultural and paleoenvironmental chronologies in the region that span the transition from the last Ice Age. Her other research, based on collaborative work in Ethiopia, targets the opposite end of the archaeological record, at its origin in the Pliocene. Thompson is PI of the Yale Paleoarchaeology Laboratory.

Dr. Jessica Thompson introduces her talk "Human Transformation From Environmental Managers to Ecosystem Damagers" for "Humans: The Planet-Altering Apes" in May 2022.