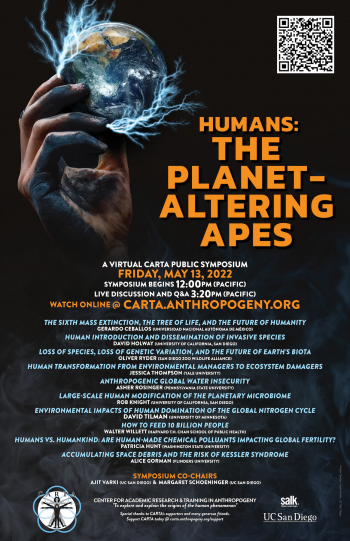 Summary:
CARTA is a broad-based coalition of scholars interested in defining and explaining the evolutionary origins of humans and in generating testable hypotheses and new agendas for research on this subject. CARTA public symposia emphasize our primary objectives –– to explore and explain where we humans came from, and how we got here. Given the focus on human origins, we generally limit discussions of current day implications and questions regarding the future of humanity.

However, we now feel the urgent moral and practical imperative to call attention to the long- and short-term impact of humans on the planet that we inhabit, and the consequences for the future of our species. Accordingly, on March 5, 2022, CARTA presented "Human Origins and Humanity's Future: Past, Present and Future of the Anthropocene,” co-chaired by Leslie Aiello (University College London) and Charles Kennel (Scripps Institution of Oceanography and University of Cambridge), which introduced discussion on the current age of human activity, coined the “Anthropocene.”

To elaborate upon and extend this discussion, this symposium will address specific examples of how humans have drastically altered the planet. Acknowledged experts will discuss clearly defined global-scale negative impacts on planet earth, our life support system (other than climate change, population growth and infectious diseases, which are well-known). Each talk will succinctly describe a specific impact, the role that our species has played, and conclude with ongoing or potential approaches to mitigation.

In the process, we are coming full circle to Anthropogeny, asking how a single species could have evolved the ability to so drastically alter the entire planet.

Media for each talk can be played by clicking on icons in the table below, or by clicking on the individual talk titles below and then the attachment file at the bottom of the page.

If you enjoy this event, please consider supporting CARTA's quest to explore and explain the human phenomenon.