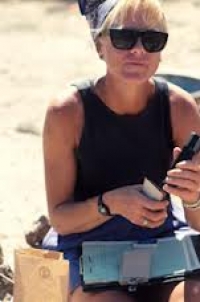 Sally McBrearty is a professor and head of the Department of Anthropology at the University of Connecticut, Storrs. She has directed archaeological field projects for more than 30 years in East Africa, where she focuses upon the Middle Pleistocene and the origin of Homo sapiens. She is particularly interested in the behavior of early humans, their environmental setting, and how behavior and environment interact with geologic processes to produce the fossil and archaeological records. She received her undergraduate degree from the University of California at Berkeley and her graduate degrees from the University of Illinois, Urbana; she has held faculty positions at Brandeis, Yale, and the College of William & Mary. Her work has been supported by NSF, the Wenner-Gren Foundation, the National Geographic Society, and the L.S.B. Leakey Foundation, and she has served on the editorial boards of the Journal of Human Evolution, Before Farming, and Springer’s Vertebrate Paleobiology & Paleoanthropology monograph series. Her 2000 publication, with Alison Brooks, “The Revolution That Wasn’t” in Journal of Human Evolution is the most frequently cited paper in that journal’s history. She was elected a fellow of the American Association for the Advancement of Science in 2007.